A Little Manual for Knowing (Meek)

A consequence of the “knowledge-as-fact” approach is that it divides the knower. It assumes one can detach himself from the act of knowing.

Covenant epistemology: the knower “pledges himself to the yet-to-be-known, the way a groom pledges himself to a bride.” This is quite different from when the postmodernist attacks rationalism. The postmodernist quite correctly says that all knowing is done from a finite standpoint, with the implication that knowledge is relativised. The covenantal knower, by contrast, sees knowledge in an almost eschatological light. In Meek’s words, knowledge is a “pilgrimage” in which “we journey together.” “All knowing is a coming-to-know.”

This book is unique among Christian epistemology texts in that she gives exercises at the end of each chapter.

Knowledge as love implies that knowing ← → Being go hand in hand. Reality is person-like, not an amalgamation of bits of information. Meek argues, by contrast, that reality is a gift. When I look at a thing, on first glance we see it as it is. But in a Creator universe, the thing is also “what-it-promises-to-be” and “what-it-ought-to-be.”

Promise language then is covenant language. This is tied with the notion of “reality as gift.

Her thesis is “we love in order to know.” I don’t think this works as a global thesis, but in terms of some knowledge-situations it is probably accurate. This type of loving is an “active receptivity.”

There are some good thoughts on “cultivating wonder” as a mental habit. In her nice phrase, “it is a trained readiness to be astounded.”

Covenantal knowledge involves a “pledge,” which is the “I do” of love. In this knowledge “we give ourselves to be known,” to pledge to the Other’s “being.” This is what Torrance and Polanyi mean by knowing “kataphysically,” according to the nature of the thing known. The thing presses its reality upon your mind. Granted, this makes more sense in terms of religion, philosophy, and politics than it would in looking at a blank wall.

If these things about knowledge are true, then knowing also involves a “maturity in love.” This is where knowing’s “interpersonal” dimension is clearly seen. We need other persons to help us mature and be the person’s we are.

She has a neat section on “The Void.” The void doesn’t have to be evil. It can just be the realization of non-being. It can be how healing can begin. It’s sort of like having the law preached to you. She has a neat diagram on the four dimensions of humanness.

In a moving line, Meek writes, “In the Void, we must cry out in hope for the gracious deliverance and inbreaking of new being. This is a key act of inviting the real.” In another diagram, she calls this “the knowing event.” “The Holy is the gracious possibility of new being.” It is where “epiphany” happens. 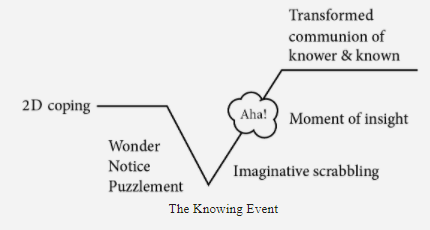 Now we are going to add persons to the picture 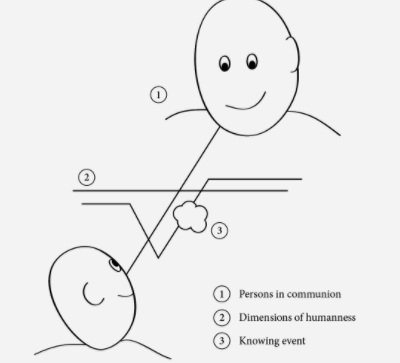 Meek gives good guidelines for cultivating the real: choose wise guides, for one. Beginners don’t know a lot about philosophy. I personally wasted years on dead-ends. You must also “place yourself where reality is likely to show up.”

Now Meek moves into the territory of the Hungarian chemist Michael Polanyi and his idea of “Subsidiary-Focal Integration” (SFI). We will go back to Plato’s Meno. If knowledge is simply about transfer of propositions, that which we do not know, then we can never cross the Platonic chasm between Knowledge and Becoming, since we are in the realm of Becoming.

Perhaps we are getting too far afield. Meek’s point is that knowledge also involves a “subsidiary” dimension that happens below the surface of the focal. Perhaps we can reframe the above-mentioned Platonic problem this way: let’s take Heidegger’s question on being. What is being? To ask that question presupposes some knowledge of being, otherwise we couldn’t use the word “is.” Let’s say a toddler is learning. He needs sentences to learn, yet he doesn’t know what a sentence is, so how can he learn?

“All knowledge and knowing has a ‘from-to’ structure.” It is not “a linear relation.” Think in terms of clues and patterns. There is no linear connection, yet your mind is already seeing the evidence for patterns. It then makes a proleptic jump, which Meek calls “integration.” It’s like playing “Wheel of Fortune.” Her conclusion: “As we indwell the subsidiaries, we creatively integrate to a sustained focal pattern...We actively shape clues to the pattern; and we passively submit to the pattern.”

And then comes the moment of epiphany: [it] feels very much like a gracious gift from outside us.” Indeed, “embedded in epiphany is the shift from active to passive, from giving to receiving. It feels like a shift from knowing to being known.”

Knowing as shalom: we know shalom when the tension in the knowing encounter is brought to a proper resolution. It is the joy we experience in seeing the “natural fittingness” of something that was put together. She has some interesting--but only tantalizing--suggestions on shalom and healing. That definitely needs to be developed.

* Covenantal knowledge is commitment, not curiosity.
* Knowing is inviting the real, welcoming the yet-to-be-known.
* We seek to indwell and be indwelt by the yet-to-be-known.
* Coming to know proves to be a process of moving from looking at to looking from in order to see transformatively beyond.
* IFM = indeterminate future manifestation.” Any good integrative pattern promises future unfoldings of dimensions and horizons.
* Insight isn’t informational--it is transformational.

This is a dynamic little book. Not all of her arguments are sufficiently developed, but I think she knows that, as she intends this to be a gateway to her larger works on epistemology. This book succeeds where so many epistemology texts from post-evangelicals have failed. Too often we hear that rationality ought to be “Embodied” or “situated.” Fair enough. Few really say what that means. In other words, granted that knowledge is embodied, what would mechanism or the knowing act look like? Meek actually develops an answer.

It’s also fashionable, especially among Reformed, to advocate a “coventanal epistemology.” That usually means quoting Bible verses such as “fear of the Lord is the beginning of wisdom.” That’s true, but by itself it tells me nothing of how knowledge works. If I preface a trigonometry problem with “Fear of the Lord,” I still have to work the problem and the answer will be the same as if I didn’t say “The Fear of the Lord.” Meek’s approach reshapes the covenant question in terms of knowledge as gift, pledge, promise, etc. Which is actually what a covenant is.

BayouHuguenot said:
Her thesis is “we love in order to know.” I don’t think this works as a global thesis, but in terms of some knowledge-situations it is probably accurate. This type of loving is an “active receptivity.”
Click to expand...

I've added the book to my list, but this is the part that sticks out to me. If pressed, does it reduce to a generalized fondness for the unknown as such? Without some information about the object of love, I don't know how to answer the question as to what is being loved.

py3ak said:
I've added the book to my list, but this is the part that sticks out to me. If pressed, does it reduce to a generalized fondness for the unknown as such? Without some information about the object of love, I don't know how to answer the question as to what is being loved.
Click to expand...

Exactly. She says she fleshes out the details in Loving to Know and Longing to Know. I read this on a library app. I might read those as well.

Staff member
Thank you! If you get around to them and have some thoughts on her fuller discussion, I'd be very interested to hear them.

P
The meek shall inherit...meaning of "meek"