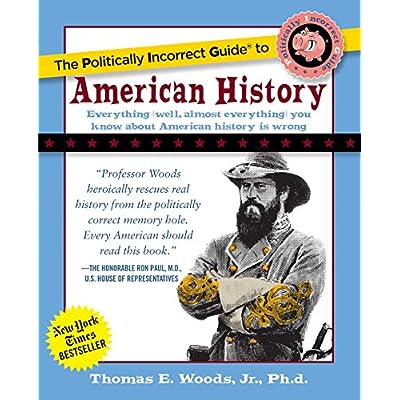 ~The Politically Incorrect Guide to American History~ is a handy compendium which deftly challenges the politically correct orthodoxy that become entrenched in the academia and media establishment. This politically incorrect guide to American history is not just some eccentric rewrite, but a bold challenge to years of prevalent liberal mythology and revisionism that has become holy writ amongst academia, the media and the publishing establishment. With the help of the Marxist Frankfurt School, there has been no shortage of trashing of America's heroes and a real fog has been cast over our past as it really was. Also, there is a pervasive tendency to accentuate the negative and ignore the positive in American history. Not surprisingly, the founding fathers are dismissed as repressive dead white men whose defining attribute revolves around being slaveholders. Many American history books celebrate the aggrandisement of power within the State and others like Howard Zinn echo Marxist themes of class warfare where the American people find a saviour in FDR with his sweeping New Deal social and labour reforms. In the eyes of many historians, centralisers and leaders that champion big government have become America's heroes. Thomas Woods is a right-leaning Columbia educated historian and he comes out guns blazing with this powerful little volume. He nimbly takes on the left-wing intelligentsia and sets the record straight on American history, economics and political issues. Foremost, if we are to get a feel for what constitutes a politically incorrect history book, I should duly note what political correctness is:

po*liti*cal*ly cor*rect: marked by or adhering to the typically progressive orthodoxy which seeks to redress historical injustices in matters such as race, class, gender, and sexuality.

With this firmly in mind, Woods systematically confronts political correctness and sets the record straight on American history from its impetus.

The first chapter entitled The Colonial Origins of American Liberty gives a depth of insight and appreciation for the fledging beginnings of our country. For starters, Woods notes, "[t]he colonists were not paragons of diversity. They came from one part of Europe. They spoke a common language. They worshipped the same God." Thomas Woods, a Roman Catholic no less, vindicates the much maligned Puritans who are often subjected to vehement denunciations by modern critics. He clears up a great deal of mythology and fabrications about the culture, politics and life in their colonies. Often portrayed as genocidal Indian-killing, witch-burning religious nuts, the Puritans in fact sought to establish a godly commonwealth and live peaceably with their neighbors. For example, Woods points out that they recognised Indian fishing and hunting rights even on lands that the Indians had sold them. They sought to spread the Gospel with Christian missionaries in a gesture of goodwill and respect for the humanity of the natives. From the Puritans came the covenant origins of the American polity. They believed that covenants between rulers and ruled were contractual and to be honored. As such, God sat in judgment of the magistrates when they subverted the liberties of the people. Repeated usurpations by higher magistrates obviously vanquish the covenant and the people could throw off the oppressive order in favor of new safeguards for their liberty. This idea and practice played no small part in the 1776 revolution, which the loyalist Tories scoffed at as a Presbyterian Parson's Rebellion because of the substantial participation of colonial clergy in the struggle for independence. The misnamed American Revolution was profoundly conservative in its character and antithetical to the fierce egalitarian ideology that animated the French Revolution. The War for Independence was a fight for freedom from a tyrannical government. The war was not approached lightly but pursued only after relentless petitioning, pleas and acts of interposition to arrest the abuses and usurpations against the rights of the colonials that were perpetrated by the Crown. It was very much a struggle of restoration of the rights of the Englishmen as well as a struggle for political independence.

Woods sets the record straight on constitutional history like no one else and there is a poignant chapter dedicated to constitutional history and an insightful one dedicated to the Principles of 1798. Since big government reached fruition in the twentieth century, pivotal aspects of American constitutional history have been maligned, distorted and obfuscated. Not surprisingly, modern historians have sought to reinvent the American founding or at the very least neglect pivotal aspects of it. Woods makes a poignant case for real federalism, states' rights, and the compact view of the Union-which gives credence to the doctrine of interposition as well as the legality of secession. The author is rather adroit and perceptive as he picks the scabs of nationalist-consolidationist reinterpretation off of the Constitution. With the principles of 1798, Jefferson and Madison adroitly challenged the Alien and Sedition. Centralising nationalists that scoff at the Kentucky and Virginia Resolutions ignore the doctrine of interposition's continuity with the American revolutionary tradition where petition, remonstrance, and finally interposition by the colonial magistrates were frequently deployed in order to arrest usurpations by the British Crown. Madison and Jefferson were merely following in their revolutionary founder's footsteps in decrying abuses while proclaiming their liberties and the compact nature of the Union.

Shining light on Chief Justice John Marshall's grab for power in Marbury v. Madison, Woods puts to rest the liberal myths about judicial review and the sacrosanct notion that the federal judiciary is the sole guardian of the Constitution. The idea that the Supreme Court was intended to be the final arbitrator in all constitutional questions is unfounded and not original intent of framers. Woods illustrates that it's actually okay to own a gun, and manifests the founder's sentiments about the Second Amendment and the nature of the militia. He expounds upon the forgotten Ninth and Tenth Amendments, which essentially meant that just because a right is not in the Bill of Rights did not meant it's not a right and that whatever the states did not authorise the Feds do was left to the States respectively.

Moving onto a perennial subject of controversy, Woods tackles the American Civil War with amazing clarity. Recent leftist historians like the Marxist Eric Foner and liberal James MacPherson have obfuscated and maligned the annals of history regarding the late war between the States. Moreover, Lincoln is frequently heralded as America's greatest President, but his record of constitutional abuses was unprecedented. Lincoln's bloody war left over half-million Americans dead which was more than any other war in U.S. history. Woods astutely unseats the many myths that buoy northern moral superiority. He makes light of Union General Benjamin "the Beast" Butler's infamous rape order (which practically sanctioned the rape of southern women) and elicited protest from the British embassy. The War for the Union has long been heralded as a great crusade against slavery while Lincoln is cast as a benevolent egalitarian emancipator. In fact, Lincoln was no friend of blacks. He disparaged them and showed his disregard for black freedmen. When asked at the Hampton Roads conference of the plight of the freedman, Lincoln replied, "They can either hog, root or die." Contrary to popular belief the Emancipation Proclamation only liberated slaves in states out of Union control and was primarily a pragmatic political device to keep the British and French from intervening and to foment a slave uprising. Woods chronicles the total warfare waged against the people of the South, which perceptively reveals the severity and brutality of the northern invaders. He illustrates that it is not adequately manifest in our high school history books. The truth about race relations in the upstanding North is chronicled and the brutality of Reconstruction is addressed as well. The moral high ground of the Union cause loses ground amidst simple historical realities being brought out in the limelight as well as the condescending quotations of the Union leadership themselves. Then there are the Cherokee Confederates who after years of abuse at the hands of the Union cast their lot with the Confederate Cause. And who was the last Confederate General left standing? Cherokee General Stand Watie ring a bell? Woods offers a remarkable historical capsule on the Cherokee Confederates.

Woodrow Wilson's quest to "make the world safe for democracy" is revealed as well as the political intrigue during the Great War. Woods judiciously manifests how Wilson courted conflict with the Germans and made unreasonable demands. The Kaiser's Germans were not as provocative toward America as establishment history writers have made them out to be. Woods chronicling goes beyond just the Lusitana incident. The Great War proved to be America's Great Pryrrhic Victory and in reality only made the world safe for Hitler and Stalin, and set the stage for the Second World War.

The prevalent myth that FDR brought us out of the Great Depression through massive state intervention is squarely challenged. Woods illustrates FDR's shrewd machinations and duplicity of promising no U.S. entry into World War II while he covertly worked behind the scenes to set the stage for U.S. entry.

Then there is lionised John F. Kennedy who had his great classic 'Profiles in Courage' ghostwritten by his father Joe's speechwriter, just as he had his Harvard papers edited. Now, the school of government there is named after him. Go figure. Liberals and crypto-Marxist revionists have been groaning for years about McCarthyism and witchhunts, but Woods illustratively chronicles how the State Department was awash in communist agents during and after FDR's heyday after all. Woods makes light of how good ole President LBJ stole his first Senate race, and his war on poverty only made poverty worse. Big surprise there! "When you subsidize poverty and failure, you tend to get more of both," surmises J.D. Davidson of the National Taxpayers Union. There is a chapter on the fabled Decade of Greed-the 1980s-where Woods dismisses an assortment of liberal lies and distortions about a time when the American economy was growing by leaps and bounds again and charitable giving reached an all-time high. The final chapter tackles the Clinton years and refutes the preposterous notion that the "era of big government is over."

This book is awash in many other fascinating facts and is a real monkeywrench maligning the malaise of historical obfuscation in our PC age. Challenging and invigorating, Thomas Woods confronts numerous myths about American history and manifests little known and intriguing historical facts. This well-designed little tome has lots of neat tables and is punctuated by a plethora of boxed quotations. It's like the textbook that every budding right-winger only wish they had in high school! The readibility is superb and text is remarkably fluid as I read the book in one sitting. This book is as bold as it is stimulating. This book is a much needed antidote to the politically correct conventions ingrained in the American psyche over the years. It's time to take your blinders off and get ready to learn history as it really was.

This in my humble opinion is a very good book. 5-Stars!
:bigsmile:
V

The Idiot's Guide to Doctrinal Spanish?