Note from the Editor: “One of the best books I’ve ever read on the subject.” – Therese B. McMahon

God has spoken to his people, his word is contained in holy Scripture, and in speaking to them, he requires that they know what his word says. Knowing the content of the Bible, means knowing God and his Son Jesus Christ. Christ himself is the Living Word. He is the Logos which declares and communicates the Father to his church (John 1:18).

This work is a compilation of faithful teachings on both reading and studying the word of God, as well as hearing the word of God preached. Three of the works contained in this volume have not been published since the day they were originally printed for the public: those by Richard Greenham, Daniel Burgess and John Philips.

Table of Contents
God Has Spoken, Do You Hear Him? by C. Matthew McMahon
Reading the Scriptures in a Year by Nathaniel Ranew (1602-1678)
A Daily Increase of Grace Through the Word of God by John Philips (1585-1663)
Food for Newborn Babes by Henry Smith (1560-1601)
Directions for Reading and Understanding the Scriptures by Richard Greenham (1531-1594)
How Should We Prepare Ourselves to Hear the Word? by William Ames (1576-1633)
How We May Hear the Word with Profit by Thomas Senior (n.d.)
Hearing the Word by David Clarkson (1622-1686)
Rules for Hearing the Word of God with Certain Saving Benefit by Daniel Burgess (1645-1713)
Hiding the Word in Our Heart by Thomas Manton (1620-1677)
APPENDIX 1: Helps to Profitable Bible Study by C. Matthew McMahon
APPENDIX 2: The Writers Contained in This Volume by C. Matthew McMahon 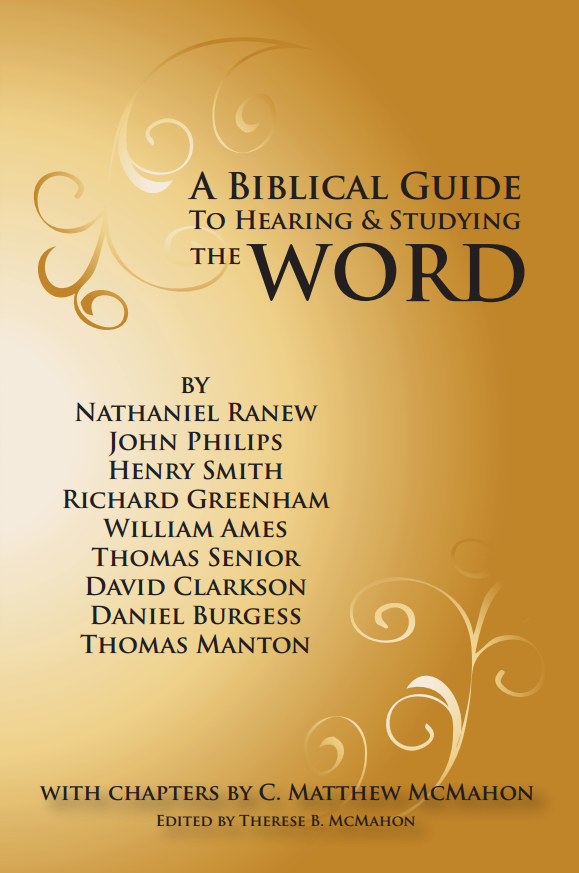 The distributor has a 10% off on all print books with coupon code BEACH10 at checkout here.

NEW: A Treatise of the Loves of Christ to His Spouse by Westminster Divine Samuel Bolton (1606-1654)

God is Our Refuge and Our Strength by George Gipps, Westminster Divine