Stalin: The First In-depth Biography Based on Explosive New Documents 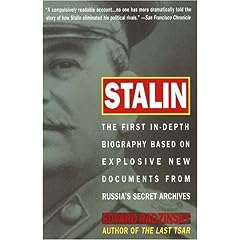 Over the years I've read a few political bio's and never thought I'd ever read one on Stalin, somehow it ended up on my desk [I work at a library] and I'm reading it now. It's an 'easy read' as far as political bio's go, nice short sections of info that leave you wanting more.

Amazon.com
Granted privileged access to Russia's secret archives, Edvard Radzinsky has broken down the iron curtain of myth, secrecy and lies that has surrounded Stalin's life and career, painting a picture of the Soviet strongman as more calculating, ruthless and blood-crazed than has ever been described or imagined. --This text refers to an out of print or unavailable edition of this title.

From Publishers Weekly
Russian historian and playwright Radzinsky, whose bestselling The Last Tsar chronicled the assassination of the Romanov royal family, has produced a vivid, astonishingly intimate biography of Joseph Stalin. By drawing heavily on previously unavailable primary-source documents in recently opened party, state and KGB archives, he portrays the Soviet dictator as even more sadistic and methodically demoniacal than Western historians had supposed. Pointing to the young revolutionary's repeated escapes and trips abroad, Radzinsky builds an intriguing circumstantial case that Stalin was a double agent working for both the Bolshevik cause and the czarist secret police. He documents how Lenin recruited Stalin into terrorist violence and used him to tame and crush dissidence within the party ranks. Through interviews with Stalin's granddaughter and with the niece of Nadezhda Alliluyeva, the dictator's wife, Radzinsky pieces together the violent quarrel between Stalin and his wife that led to her suicide weeks before she was to have major surgery. Using oral testimonies, the author deduces that Stalin's murderous anti-Semitic campaign of 1953?whose goal was the deportation of hundreds of thousands of Jews to Siberia and Kazakhstan?was a prelude to his plan to launch a third world war. Radzinsky also tracked down one of Stalin's bodyguards, Peter Lozgachev, whose testimony that Stalin's guards deliberately denied him medical attention and left him to die adds weight to the author's hypothesis that Stalin was eliminated by close aide Lavrenti Beria (who reportedly boasted, "I took him out") as part of a conspiracy to avert nuclear Armageddon. Stalin died in 1953, aged 74 by standard sources, although Radzinsky maintains he was a year older. Photos. 50,000 first printing; major ad/promo; author tour.
Copyright 1996 Reed Business Information, Inc. --This text refers to an out of print or unavailable edition of this title.
P

how long has it been out anyway? it's interesting, but i believe it's 10-years old, so the new revelations aren't so new as the headlines lead me to believe

i believe the author presents evidence that stalin was murdered

Puritanhead said:
i believe the author presents evidence that stalin was murdered
Click to expand...

Right now I have Mao: The Unknown Story by Jung Chang & a bio of Lenin [can't remember much more then that], have you read the Mao bio?

What's amazing - and not a little disheartening - is how Stalin is still held in respect by Russians, though not on the level of Lenin, naturally.

We've emphasized Stalin's crimes to Dmitry, but have been more hesitant to do the same with Lenin. Tread on Lenin at your peril. Russians do NOT have the same view of their country's past as the rest of the world.
E

Remember the Olympic Boycott, we won all the gold medals.......that ruled!

Gryphonette said:
What's amazing - and not a little disheartening - is how Stalin is still held in respect by Russians, though not on the level of Lenin, naturally.

We've emphasized Stalin's crimes to Dmitry, but have been more hesitant to do the same with Lenin. Tread on Lenin at your peril. Russians do NOT have the same view of their country's past as the rest of the world.
Click to expand...

I hear ya. It seems Khrushchev was able to shift ALL the blame to Stalin, Lenin and the party are protected and so is Communism. For an overview I read "Communism" by Sandle today, very short and easy to read. Tonight I'm picking up:

It's a biggie, has anyone else read it?

Where do I go from here? I'm interested in Tolstoy's The Kingdom of God is Within You.

Suggestions? [I'm off for a week and sleep little, so I'm able to go through a few more titles this week.]

No Longer A Libertine

Careful what you wish for, Putin is a loon.
P

No I never read the Mao book. I thought about it. Mao like Pol Pot and Stalin and Hiter was a despicable, miserable excuse for a human being that destroyed countless lives. He was a rigid atheist and secular humanist, and possessed of cruelty and depravity that knew no bounds.

I got right many books on totalitarian regimes in history. Michael Burleigh's book on Nazi Germany and the Black Book of Communism are among the best expositions of totalitarian evils in the twentieth century. I might have a hundred books collectively on totalitarianism in history.

I reached a point where studying certain facets of history became utterly depressing, so I laid off it. Reading Norman Davies' book about the Polish resistance in Nazi Germany was downright depressing and emotional. No sooner than they broke the yolk of Nazi tyranny, they found the snare of the Soviets to supposedly "liberate" them. It was a truly sad book.

In the First Circle (Solzhenitsyn)

Historical meditations on Scripture's first promise for the genesis of a new year.

P
John Owen on the New Covenant (Read Only)