In the absence of the blogs of old here at PB where one could collect links to significant threads and posts, I’m going to post here for reference some previous eschatology threads (I’ve done the same for textual material). I'll give a link to here in my signature. As I’m 80 now, and growing frail, I figured I’d save these for posterity to consider when I’m gone to my Saviour.

These are a collection of such threads and/or posts of mine (at PuritanBoard) to date, as well pharmakeia studies I’ve published or made available online In the PB threads of others I have usually linked to my first post therein, and from there one can then go back to the beginning of the discussion if desired.

As one can see, some of these are earlier explorations on themes in Revelation – works in progress. I continue working on the topic of Babylon, and what the implications of that are for us in the 21st century. I will update this list as needed. Click on Spoiler to read.

Another presentation of the impact recreational sorcery has had upon our culture (in the U.S. and U.K.), and its place in the final period of this age.

Subtitled, Restoring confidence in the applicability of John’s Apocalypse, the final prophecy. This may be my last post in this category, as I’m drawing near the end of my course at age 80 – though I can’t make any promises as regards that!

My first post (#43), here. Is Covid-19 vaccination the mark? A Biblical, extended, response.

Four posts of mine in this thread, starting at #7 – discussing the radically differing natures of post and a-mil, the rough timing of the end, and can America be in prophecy?


The Salvation of Jews & Armageddon from an Amillennial Perspective [Aug 2021]

How do the Jews fit into the end times, and Zech 14, literal or typical? I post 8 times, starting in #9.

Why is our overheating world not getting Christians thinking about the 4th vial or bowl of Rev 16:8, 9 and God’s wrath in a burning heat judgment? Why are we fairly blind to not only that, but other markers of the end – from an Amillennial viewpoint?


Current state of Satan within the amillennial framework- Loosed or Bound? [May 2021]

Excerpt from my small book, A Poet Arises In Israel, in the larger book (free digital), A Great and Terrible Love (or on Amazon), on the judgment of the Jewish holocaust, the holocaust of divine wrath Jesus suffered, and the eternal holocaust to come on unrepentant sinners, Jew and Gentile. Of eschatological significance!

My main post here, in #43, some in-depth scrutiny – and exposition – of the amil view.

Interesting discussion. 6 posts of mine in all, on pages 2 and 3.

From my Google Drive: bit.ly/2zIcOGO


How does Eschatology affect how we live as Christians? [Feb 2018]

What will Christ's return be like? Earlier posts have biblically concluded that He will literally, physically return, but I'm curious about something. Will He return, to a certain part of the world, and we'll all need to seek Him out and discern whether or not He is the true Christ? Or will...

12 posts of mine, a few tangling with a postmil brother


Quick Survey on Eschatological Positions of Current Board Regulars [Feb 2016]

Where does the community of PuritanBoard stand with regard to their eschatology? Amil, Premil, Postmil? Preterite, Partial Preterite, Historical Premillennialism? Pre, post, mid-trib or pre-wrath Rapture? Literal Millennium or not? Also, out of curiosity, since people seem to divide the...

Not at all. Jesus' ascension is also his coronation. What had been a provincial body of believers of basically one nationality has gone beyond all borders to all nations. However, the tribulation is an ongoing reality of believers living in a fallen world awaiting the full consumation of Jesus...

RichardNZ, Anthony Hoekema in the Bible and the Future does use Revelation 21 to make his case for New Jerusalem being on the new earth—in his chapter, “The New Earth”, starting on its first page, 274. Please note, those who would deprecate with phrases such as “men…trying to soar above...


Thoughts on similarities between the premillennial and amillennial views [November 2016]

This ruffled some feathers.


Theonomy and Drugs [March 2016]
I'm starting this where I first entered the discussion, at post #18 (one can go back to see the start). It's amazing how folks can wax knowledgeable on the topic of psychedelic drugs and yet not know what they are talking about. It would be laughable were it not reflective of such great danger to the saints, for when these things are allowed in the temple of God they are brought into communion with the Spirit of Christ. Imagine, allowing the demonic such access!

Is it a western way of separating off drugs as a separate category which leads me to see scripture as largely silent on the issue of drugs? I wonder if the emphasis on personal responsibility in shunning the prostitute rather than simply criminalizing the individual is part of the answer. It...

This is an unusual thread (I start posting in #7). Toward the end a gentleman opposes me with a secular – worldly – knowledge of the topic in question used medicinally but ignorant of its spiritual affect in the soul. Because it is effective as an analgesic (which I acknowledge) he says it should be given to Christians to relieve pain, discounting the terrible spiritual danger this involves them in; he thinks worldly counsel trumps spiritual understanding. The admins closed the thread before I could finish responding. Later I was told not to write on this topic anymore as some admins and mods do not agree with my view.

I then had a private discussion with a top admin regarding sorcery, answering his and others’ objections, with him unable to refute my presentation, so I take that as having a green light if I proceed prudently. 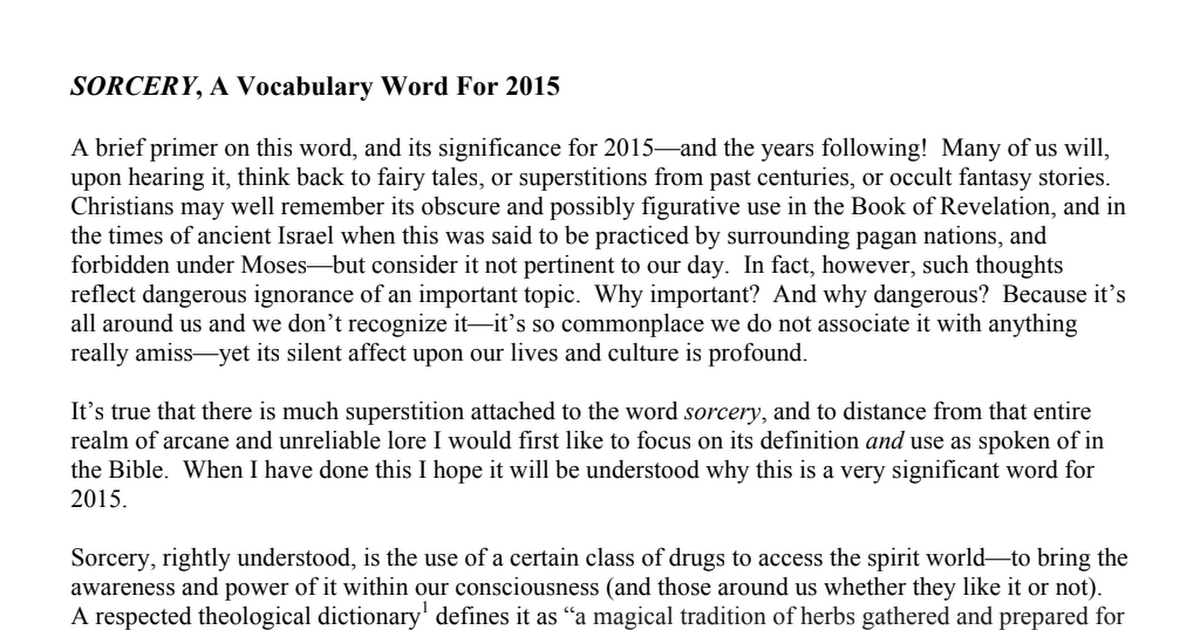 SORCERY, A Vocabulary Word For 2015.pdf

PDF from my Google Drive

PDF from my Google Drive


The Roman Pope Is The Antichrist [2014]
Responsible opposing views, plus exploration of “man of sin”

Looking at “mediate prophecy” in Puritan thought, and Richard Bauckham’s thoughts on “eschatological excess” in prophecy, and its purpose. Examining the Puritan’s views, and Wm. Milligan’s early form of eschatological “idealism”.


The Fate of Babylon, a study in determining the identity and demise of Babylon in John’s Apocalypse [revised 2016]

Starting in post #36
(Some repetition in these “mark” posts)


Postmillenialism: An Eschatology of Hope [Sept 2012]
Steve starting in post #21


Undecided on a Particular View of Eschatology [Feb 2010]


Thoughts on Babylon the Great in Revelation [Jan 2010]


Would you smoke Marijuana if it were legal?
A thread that disappeared — was censored!


Marijuana Allowed in the Church? Thread [May 2012]


Marijuana Allowed In The Church? The impact and sin of Biblical sorcery (pharmakeia) in the 21st century [in PDF]
[From my Google Drive]

Thoughts on Babylon the Great in Revelation
2

'Pharmakeia' II: Biblically-defined Sorcery in the 20th and 21st Centuries